BOOKINGS OPEN 1 APRIL
Tickets for all evening performances are $26 , and
Tickets for matinee performances are $23.
Group discount for 10 or more available at box office only.
---
Live Play On Stage: Orson's Shadow tells the story of an ill-fated theatrical collaboration based on real events bringing together five iconic figures in the history of stage and screen. These characters can't but help to be entangled in a battle of egos, the tragic decline of a career, the breakdown of a tumultuous marriage and the farcical production of an absurdest play all for the sake of art.

In 1960, acerbic and uncompromising drama critic Kenneth Tynan has decided to convince his friend Orson Welles to direct Sir Laurence Olivier in Ionesco’s newest masterpiece Rhinoceros. Larry plays alongside co-star and future Mrs Oliver Joan Plowright who is more in tune with the new wave of theatre in England whilst the glorified yet deteriorating Vivien Leigh tries to make sense of her own life and marriage to Olivier. 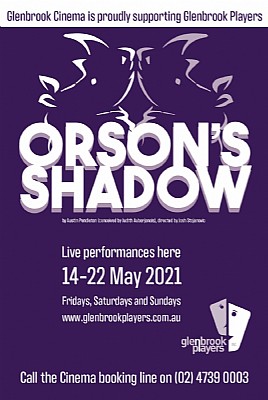