The Keeper at Glenbrook Cinema 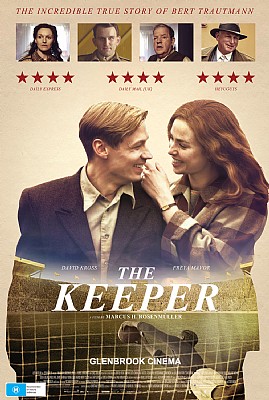 Based on an incredible true story, THE KEEPER follows Bert Trautmann, a German prisoner of war whose exceptional skills on the soccer field get him noticed by the manager of a local football team. Impressed by Bert's prowess as a goal-keeper, the team manager gets him out of the camp to play for his team. Meanwhile, a love slowly blossoms between the manager’s daughter and Bert despite local hostility. In addition to the disapproval of his relationship, Bert’s subsequent signing by Man City brings passionate protests from the people of Manchester, a city that had been severely bombed in the War. However, against all odds he won over even his harshest critics during the FA Cup Final for Manchester City in 1956. After an on-field accident, Bert broke his neck… and continued playing to secure victory.